Constructing an enormous three-level basement right on the Bayswater Road in central London is not a job to be undertaken lightly and for that reason, specialist groundworks and concrete frame contractor Modebest knew it needed the best temporary works support solution available.

Modebest is constructing the basement for Park Modern, a new £450 million residential development with views over Kensington Gardens. The development, by main contractor Ant Yapi UK for developer Fenton Whelan, will deliver over 57 luxury apartments over 176,000sq ft plus 30,000sq ft of commercial space.

Located on a site bordered by Bayswater Road, Queensway and Inverness Terrace, the development is surrounded by busy roads and adjoining buildings. And to further complicate things, London Underground’s Central Line passes under the Bayswater Road, parallel to the excavation’s southern retaining wall. 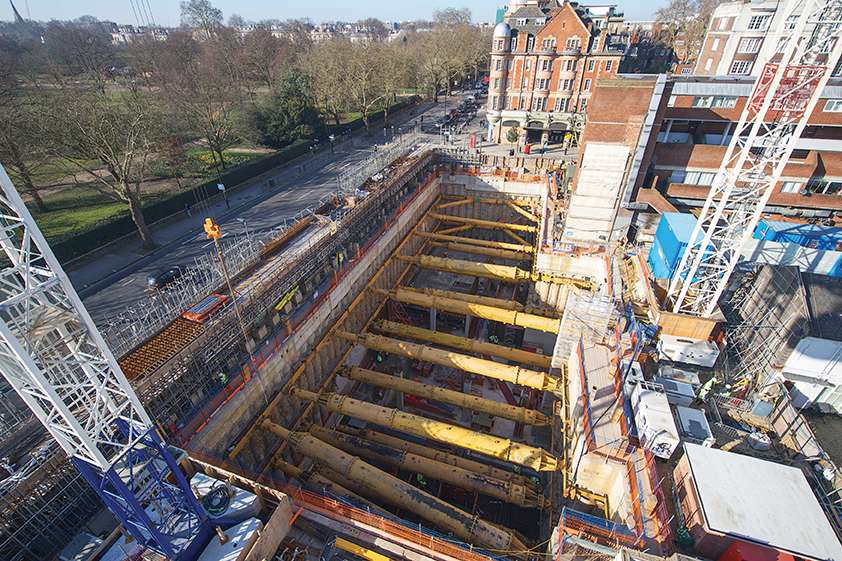 Support for the excavation, which measures 65m x 25m x 15m deep, is provided by more than 30 of Groundforce’s modular hydraulic props. The props, which include some of the company’s heaviest MP750 units, are braced against a waling beam comprising Super Mega Brace units to support the secant piled retaining wall.

Construction of the basement commenced in late summer last year with installation of a guide wall followed by construction of a secant-piled retaining wall comprising 1,000mm diameter piles at 1,200mm centres. Temporary kingposts were installed in certain locations to support the capping beam, which was then constructed. Excavation then commenced and in September the first props for Level 1 were installed. The propping solution is planned in three phases to accommodate the three levels of support required.

Level 1, which began in September 2020, will continue until the last props are removed in July this year. Props for Level 2 started going to site in during October 2020 with the last ones off-hired in May. The Level 3 props were installed in November 2020 and removed following construction of the basement slab in April 2021. In total, 33 Groundforce props will have been used to support the excavation. Level 1 uses fourteen MP250 units, each with a rated load capacity of 250 tonnes.

Five of these props, spanning the central section of the basement, range in length from about 17m to 23m. To ensure sufficient stiffness over such long spans, these units employ 1,220mm diameter Super Tubes instead of the standard 610mm diameter extension tubes. Level 2 also employed fourteen props: three MP250s (of which one features Super Tube extensions), seven MP375s (375 tonne capacity) of which four had Super Tubes; and four of the largest MP750 props, each with a load capacity of 750 tonnes and each featuring Super Tubes.

Level 3, at the bottom of the excavation, was supported by three MP250s and two MP750s and all props used Super Tubes. Groundforce’s Super Mega Brace was used around the perimeter at all three levels: Levels 1 & 2 each used 150m of Super Mega Brace, while Level 3 used 50m. One large section of bespoke steel waler beam was also incorporated at all three levels. The project is notable not only for the scale of the temporary support equipment deployed, but also for its exacting technical requirements.

“The job involves high loads and has very onerous deflection criteria,” explains Mark Whitmore, General Manager (Major Projects) with Groundforce. “To keep prop count to a minimum the highest capacity props on the market were needed.”

Because of the close proximity of occupied buildings and a live underground tunnel, ground movement has had to be limited to the absolute minimum and constantly monitored. The props themselves, besides being given a visual inspection on a weekly basis, employ Groundforce’s own remote load monitoring system to detect any movement or change in loadings.

Two props at each level were fitted with the system, which constantly monitors the situation and automatically sends an alert via SMS or email if set criteria are exceeded. On this project, the design criteria required that a movement in the secant piled wall of as little as 25mm would trigger an ‘amber’ alert to require investigation and possible remedial action. A ‘red’ alert would be triggered by 30mm of deflection – resulting in an immediate halt to all work pending investigation.

Michael Brennan, Managing Director of Modebest said “The success of the project to date is a testament to the collaborative, open minded approach we adopt to problem solving at Modebest and Groundforce have been a key partner in this journey.“
The design process was extremely complex and involved multi-party discussions over many months,” explains Mark Whitmore. Key to these discussions were the local authority (Westminster City Council) and the project’s consulting engineer AKT II.

According to Mark, in winning this prestige contract, Groundforce benefited from a good working relationship with Modebest: “We’ve worked with Modebest before on a large job at Canary Wharf where we employed 65m-long props supported on mid-span supports – another very complex application,” he explains.

Despite the complexity, the temporary support package has encountered no serious obstacles and all three phases have proceeded as planned and the programme has remained on track, reports Mark.