Excellence in concrete design and construction was celebrated at the Irish Concrete Society’s Awards Evening, which took place on the 26th of March in the Clayton Hotel, Burlington Road, Dublin.

This was the 39th Annual Awards Evening. The event is always one of the highlights of the construction industry’s calendar, which returned after a 3-year absence with 280 in attendance. The Awards recognise excellence in both design and construction in concrete and are adjudicated by a distinguished, independent jury of industry professionals. The main awards jury reviewed a total of thirty-two projects nominated in three categories of main awards – Element, Infrastructure and Building. There were also nine projects nominated for the 9th International Award, which is sponsored by Enterprise Ireland. In addition, the winner of the annual Sean de Courcy Student Award was announced.

Speaking at the awards evening Chair Roger West stated:
‘Tonight is one for celebrating, celebrating the “promotion of excellence in the use of concrete” in all its forms. The creativity and skill of the various parties in each and every one of our entries for awards tonight must be in synergy to be successful in winning one of our main award categories.

No less deserving of our admiration are those companies that export our expertise and our products, as flagships of our industry’s recognised excellence on an international stage, while concurrently supporting the local economy. This is reflected in the increasing importance of winning the International Award’.

Element Category and Overall Winner: Skate Bowl and Plaza at Le Fanu, Ballyfermot, Dublin
Chosen from a total of 13 element category entries and 32 entries for the overall award. 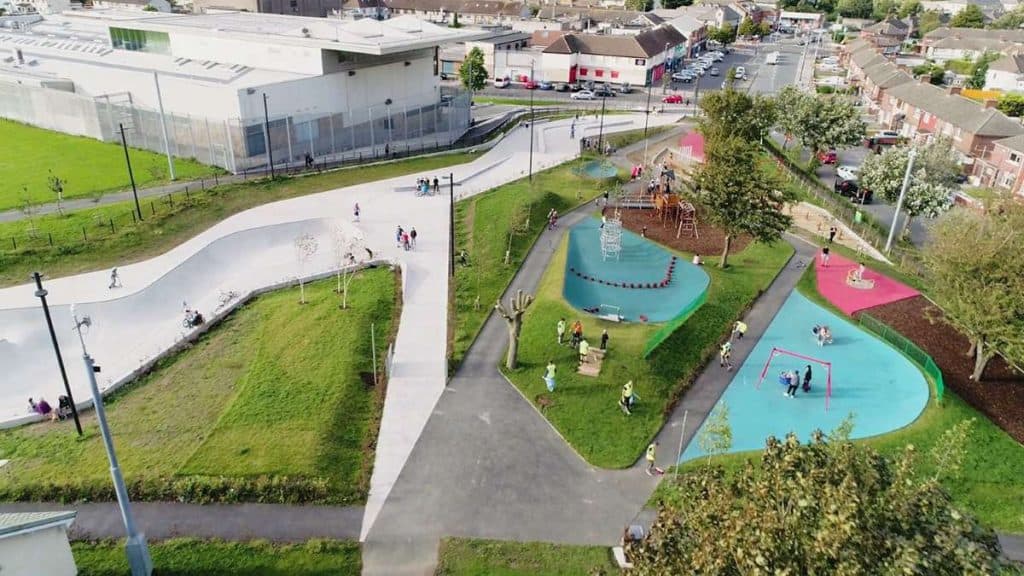 Jury Quote:
‘This community led project borne out of an international design competition has been carefully designed and executed almost entirely in concrete to provide a fantastic amenity to the youth of Ballyfermot. An extensive public consultation process has resulted in a park that caters for a range of users of varying ability from BMX cyclists to scooter users and skateboarders.
The Design Team and the contractors on site have worked together to overcome construction constraints and deliver a challenging sculptural design achieving a 2mm tolerance throughout.

The jury was extremely impressed by the smoothness of concrete surface achieved across the three dimensional skate-BMX plaza, skate bowls and skate transition area, a critical requirement of a skate park brief.

This is a project of complex depressions, protrusions and undulations that demonstrates the careful use of in-situ concrete to create a highly successful amenity of which the community is justifiably proud.’

Jury Quote:
‘The Rose Fitzgerald Kennedy Bridge, Ireland’s longest bridge at 887m in length, pushes the boundaries of bridge engineering and concrete technology and is a testament to the engineering skills and expertise of the Design Team and contractors.
This new dramatic crossing over the River Barrow not only greatly improves connectivity in the South-East region but also allows for the rejuvenation of the nearby town of New Ross.’ 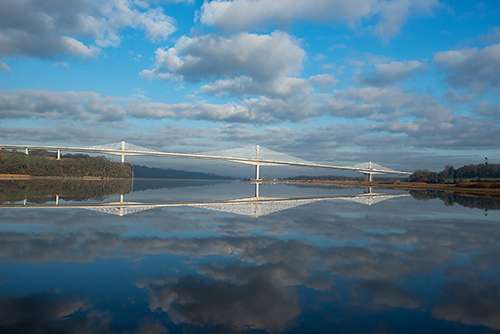 Jury Quote:
‘The new Student Hub incorporates and refurbishes the 1850s Windle Building in the heart of the historic campus of UCC. A thickened wall of cellular rooms bends around the back of the original structure, enclosing an open hall for student activity.

The jury was particularly impressed by the colour, consistency and quality of finish of the in-situ concrete elements throughout the entrance and central Market Hall. Reception desk, bench, stairs, bridges and balconies are carefully formed in concrete and together with a richly textured red brick paved floor and painted steel elements create a dynamic space for student gatherings and public meetings’. 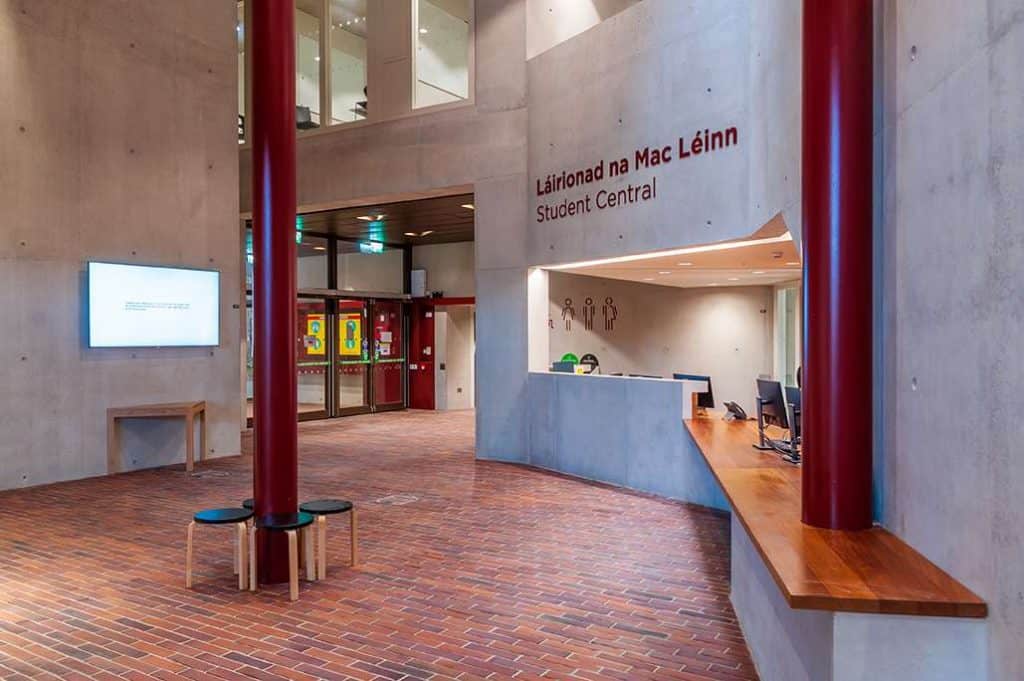 Winner of the 9th International Award Techrete and Grafton Architects for ‘Paul Marshall Building, London School of Economics’
This award, sponsored by Enterprise Ireland, recognises Irish companies who export product or service off the island of Ireland. 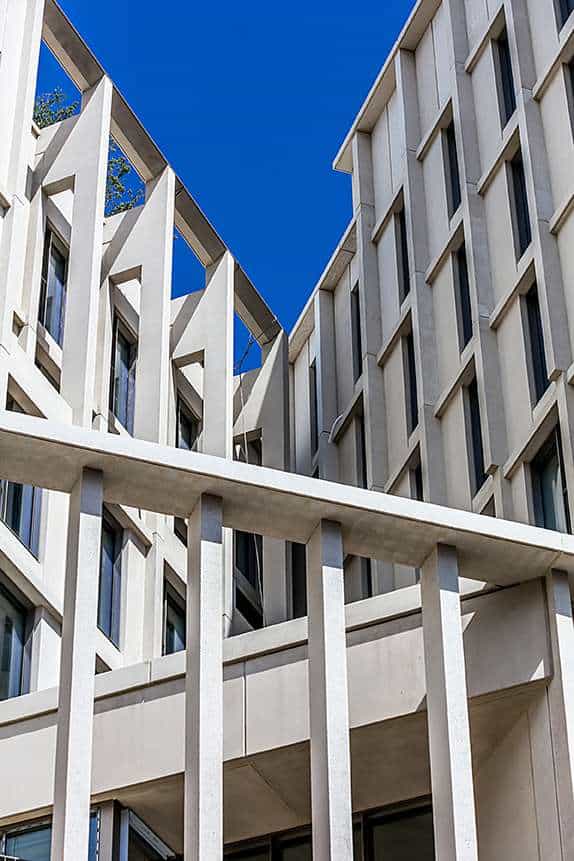 Jury Quote:
‘The Judges were impressed with the quality of all the entries for this year’s Irish Concrete Society International Awards and consequently judging was difficult with a few projects scoring very highly.
However, there can only be one winner and the judges were unanimous in their choice; based on the complexity of the units used with interlocking panel geometry plus the high quality of finish the jury has selected the Paul Marshall Building, at the London School of Economics as this year’s International Concrete Award Winner.

The creative and innovative approach to overcoming challenging joint details required to present a strong visual feature which defines the façade of this iconic London University Building was most impressive.
Sustainability was introduced to the judging criteria this year. The commitment from Manufacturers to meet the current market demands for attention to sustainability is essential, and we join with our winner in celebrating the achievement of all the entrants for their success in winning prestigious overseas projects.’

Sean de Courcy Student Award
This is an annual award given to the best final year project on a concrete related topic from the engineering faculties of Higher Education Institutes.

The award is named after the late Professor Sean de Courcy, an inspirational professor for many years at UCD, a former chairperson of the Irish Concrete Society, an author and historian of note.
The student award jury was made up of Robert Laird (ESB), Cloragh Byrne (Arup), and Martin O’Meara (CSEA).