WINNERS IN FIRST EVER APPRENTICE OF THE YEAR AWARDS 2022 ANNOUNCED

The overall winner of the inaugural #GenerationApprenticeship Apprentice of the Year Awards 2022 – as well as the winners in categories that include Services, Engineering and Manufacturing, Construction, Electrical and Motor – were announced last night by Minister for Further & Higher Education, Research, Innovation and Science, Simon Harris, TD. 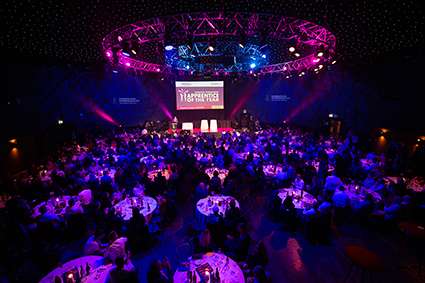 The Awards were hosted by RTE star and nationally renowned architect Dermot Bannon and held in the Round Room of Dublin’s Mansion House. 500 invited guests from across the apprenticeship system, including 187 nominated apprentices and employers in leading Irish businesses, were present.

Minister Harris said, “I want to warmly congratulate each nominee this evening on their hard work and commitment to their apprenticeship, and also thank their employers, educators and families for their ongoing support. There is a huge amount of motivation and talent on show here this evening, and I look forward to many more years of celebrating success through the Apprentice of the Year Awards.

He added, “I want to congratulate the 187 nominees, 12 finalists and, in particular, the overall winner of Apprentice of the Year Brian Riordan from Dublin, employed by Designer Group.

He concluded, “Apprenticeship is a vital lever for the continued economic prosperity of this country – it not only unlocks the skills and expertise necessary for leading Irish businesses, but also will help us to achieve critical aims in the Programme for Government, including on housing. This is a really exciting time for apprenticeships and tonight is a chance to celebrate our apprentices and the businesses who have taken them on. I would encourage anyone to consider an apprenticeship. This is third level education and you can earn as you learn. It is time to get involved and help us build the next generation of apprentices.”

Dr Mary-Liz Trant, Director of the National Apprenticeship Office, said, “It is clear from the many talented and dynamic nominees in the first ever Apprentice of the Year Awards tonight that the conversation around apprenticeship is changing. Apprenticeship is a pathway into a great career, and a choice that both apprentices and businesses can be very proud of taking. I’d like to thank all of the apprentices, businesses and families here this evening – and also thank our independent expert judges for all their hard work in making some very tough choices.”

RTE’s Dermot Bannon, architect and MC of the Awards, said, “I’m delighted to be here to host the first ever #GenerationApprenticeship Apprentice of the Year Awards. It’s clear to me that apprenticeships have evolved – they are a modern, cutting edge route into exciting and growing sectors. The talent on show here this evening is superb and I would like to warmly congratulate all the nominees and winners on their exceptional achievements.”