How do you bring a protected heritage building up to an A3 BER rating? ICIM spoke to Anthony Lynam at JODA Engineering Consultants and Tim Cronin at UCC to find out why the Tyndall Institute is now considered an exemplar sustainable facility

Late last year, UCC’s Tyndall National Institute won gold in the ‘Energy in Buildings’ category at the 2021 SEAI Energy Awards. It’s a big award for a small but complex heritage project and one that recognises the stellar effort made by all design teams involved, despite working in a restrictive Covid environment. 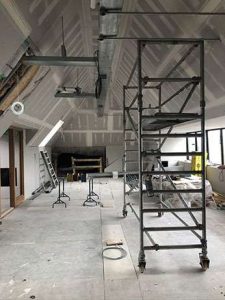 The Tyndall project involved upgrading a protected structure constructed in 1903 to a high energy performance building. An example of an early industrial building in Cork, its original use was as a drying building for wheat as part of a distillery. For over 30 years, it was used as office space, providing a series of small poorly lit rooms, as individual offices or for small groups, but unsuitable for interaction, innovation or teamwork. With the recent refurbishment, a full energy efficient design process began at concept design stage.

The goal was to optimise the building’s capacity and transform any dark spaces into light-filled environments, whilst promoting core values of wellness, sustainability and encouraging scientific interaction.

“Before works began, Tyndall was a three level building with a lot of nooks and crannies and large thick walls. Quite a few offices had been squeezed into the space every which way, so a proper refurbishment was well overdue. A lot of the central walls were taken out which has really opened up the space, while an extra floor has been added to the attic area. A new semi-industrial staircase also features, clad in finely perforated galvanised steel, carefully detailed to ensure minimal impact on the existing brickwork or the simple geometry of the building. 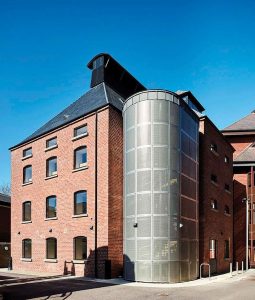 The refurb has more than doubled capacity but more importantly, it has provided for a better kind of working; it’s brighter, airier and more comfortable,” said Tim Cronin, Capital Projects Officer, UCC/Tyndall National Institute. The fabric of the entire building has been addressed; externally, bricks and joints have been raked out and repointed.

The building was re-roofed, the windows were refurbished and extensive insulation has been added. In terms of building services, all elements that have been installed are ‘smart’ – highly adjustable, easily monitored and clever enough to turn themselves off when not needed. The client opted for a mixed mode ventilation system, consisting of natural ventilation and mechanical heat recovery. No cooling element was included, adding to the project’s sustainable credentials.

Scott Tallon Walker was responsible for the design of the newly refurbished Tyndall Institute, while construction work was carried out by Summerhill Construction, with a number of sub-contractors also involved. JODA Engineering Consultants was commissioned to provide the MEP and BER services for the upgrade and refurbishment of the building. Its brief was to cater for the needs of a modern open plan office and yet remain sympathetic to the historical nature of the building, with sustainability and maintainability as key drivers. The Tyndall Institute isn’t the first historical building that JODA has undertaken.

“We have been involved in numerous conservation projects in the past, both as MEP and civil/structural consulting engineers, most notably Blackrock Observatory Cork, Mallow Castle, Barrack Square Office Campus Ballincollig, Cobh Library and a further recent appointment for the upgrade and refurbishment of another protected structure, Block 4 building Naval Base Haulbowline, Co Cork,” said Anthony Lynam, Director at JODA, which recently celebrated 60 years in business.

The firm was delighted to be part of the project team on the Tyndall job. “For us, it was great to work on such a prestigious project. The fact that it won the ‘Energy in Buildings’ award is testament to the huge level of coordination between all design teams involved.”