The construction of the 4,600m² Paediatric Outpatient and Emergency Care Unit, CHI at Tallaght was completed by the National Paediatric Hospital Development Board on the 9 September and handed over to Children’s Health Ireland (CHI). This new state of the art paediatric facility will open for services in the middle of November following a period of operational commissioning, equipping and familiarisation of staff who will work there.

The completion of this new facility in CHI at Tallaght marks a significant milestone in the children’s hospital project and the expansion of services being delivered to children, young people and their families. It follows the successful completion of a similar facility in CHI at Connolly in Blanchardstown in July 2019. Since services in CHI at Connolly opened, it has contributed to a 65% reduction in waiting lists for general paediatric services. To date 18,078 outpatient appointments have taken place there and more than 16,807 children and young people have been treated in the Urgent Care Centre. 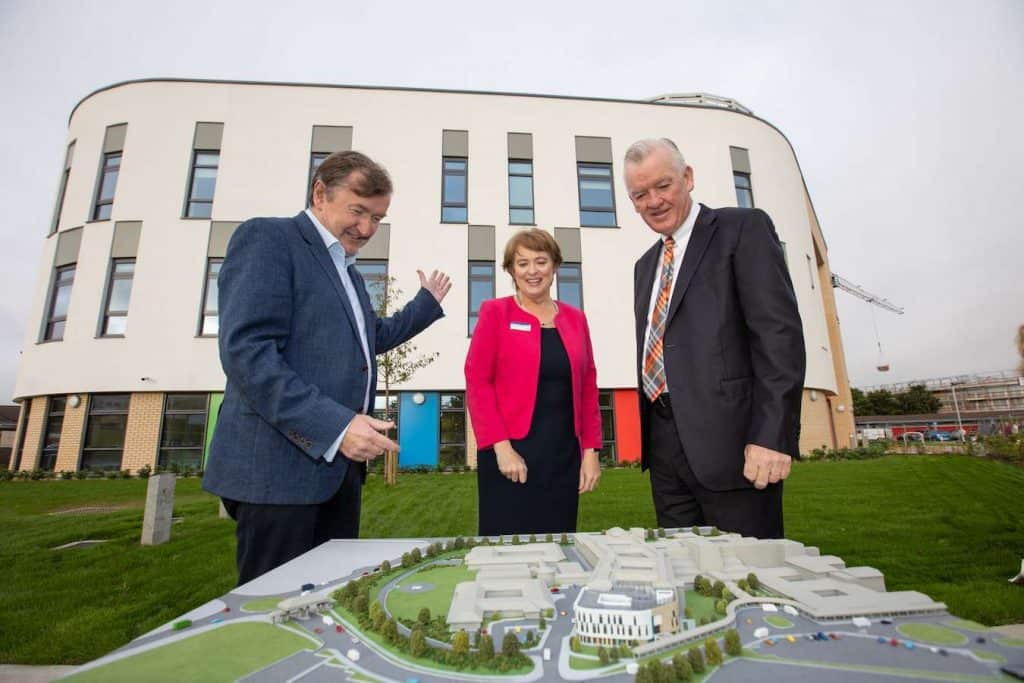 The facility is located adjacent to the main entrance to the Tallaght University Hospital. The facility is a new three-story building and includes the re-purposing of a ground floor area of the existing Tallaght hospital facility. The concept was designed to maximise the use of the existing infrastructure services like water, electrical power, waste disposal, communications, medical gases, and building safety systems. Work on expanding children’s services in CHI at Tallaght also included a significant investment in Tallaght University Hospital including the delivery of a new changing and administration block, a new crèche and the upgrade of roads and pavements, car park and electrical infrastructure.

The building was designed and built to comply with the highest building, environmental, regulations and health standards. The building was designated a BER A3 standard. The Health and Safety of all stakeholders, builders, suppliers, visitors to the site and the public were of paramount importance during the build phase.

This new facility is purpose built for children and families and will deliver 24-hour Emergency Care, as well as Monday to Friday Outpatients, Radiology, Medical Forensic Examination and Child Sexual Assault Counselling and Therapy services. There is also capacity to deliver short-stay care in that unit so that children can stay, have full consultant assessments and treatment and be discharged home without needing a 24-hour admission. This model currently exists in CHI at Tallaght and has worked very well. These expanded services are in addition to the current inpatient and OPD services in CHI at Tallaght which will remain there until the new children’s hospital opens.

This expansion of services CHI at Tallaght will facilitate the delivery of a new model of care in paediatric services in south county Dublin and its environs, delivering the right care, at the right time, in the right facility, as close to the child’s home as is possible, as outlined in Sláintecare. Prior to opening this new facility CHI will be rolling out a public information campaign targeted at families and key stakeholders including GPs and healthcare professionals, to raise awareness about the relocation of the existing Emergency Care Unit and the new services it will provide in Dublin South, West, Kildare and Wicklow.

Minister for Health, Stephen Donnelly T.D. commented on the handing over of the building from NPHDB to CHI saying: “I am delighted to see the completion of the new paediatric outpatient and emergency care unit on the Tallaght hospital campus, as part of the new children’s hospital project. This is the second of the two satellite centres to be completed, and is another major milestone reached in the project. I’d like to acknowledge the work of all involved in the construction of the new facility, most notably the National Paediatric Hospital Development Board and the contractor BAM.”

The Minister continued, “This new building will offer patients, their families and our paediatric healthcare workers a modern, light-filled and fit-for purpose environment, supporting delivery of care for children in the Tallaght and surrounding areas into the future, alongside our new children’s hospital on a campus shared with St. James’ Hospital’.”

Commenting today, David Gunning, Chief Officer, NPHDB said: “This is a very significant milestone for the Children’s Hospital Project and we are very proud of the hard work that went into achieving it. I would like to acknowledge the role played by the Main Contractor BAM and its subcontractors, the Design Team, the team at Tallaght University Hospital and of course the teams in Children’s Health Ireland and the National Paediatric Hospital Development Board who have worked so tirelessly to bring the facility to this stage – particularly in the uniquely challenging circumstances of the last 18 months.

“We are proud of the design, quality and finishes within the building and are delighted that children and young people will soon be attending a state-of-the-art facility for their appointments and treatment once it is open and operational in a few weeks’ time. This is what they deserve, and we are proud of the role that the NPHDB has played in helping to deliver on the commitment and vision of the government and CHI. Our entire focus now, together with BAM and all our stakeholders, is to deliver the new children’s hospital within the shortest timeframe possible.”

Eilísh Hardiman, Chief Executive, Children’s Health Ireland said: “Children’s healthcare is undergoing a significant transformation in Ireland. With unparalleled investment in a new model of care, digital infrastructure and the building of the new children’s hospital and the two bespoke facilities at Connolly Hospital and soon at Tallaght, we are delivering on CHI’s mission for an integrated network of services to improve health outcomes for the patients and families we serve.

This new facility together with our existing services at Tallaght, Crumlin, Temple Street and Connolly and when we move into the new children’s hospital will transform how acute paediatric healthcare is delivered to sick children in Ireland and how local secondary paediatric care is delivered in the greater Dublin area – delivering better healthcare outcomes as well as better experiences for children, families and staff in a modern fit for purpose facility that they all deserve now and for future generations to come. We look forward to expansion of services and celebrating the official opening of expanded services in CHI at Tallaght in the months ahead.”

Theo Cullinane, CEO of BAM Ireland said: “The Paediatric Outpatient and Emergency Care Unit at Tallaght will be an integral part of the new National Children’s Hospital network and will provide a vital service for generations of children. BAM is proud to have delivered this world-class facility, which will offer emergency care, general paediatric & trauma orthopaedics services, chronic disease management, diagnostics, and will also support community and home-based services.

This milestone in the construction of what is the most important infrastructure project currently ongoing in the State is an achievement which has been obtained through hard work, commitment and collaboration between BAM, all of its subcontractors, the NPHDB, TUH and CHI. We look forward to carrying on this momentum as we continue our work to deliver this landmark project.” 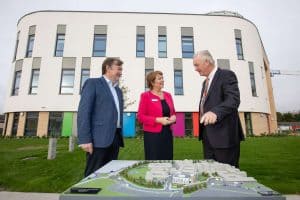 Donal O’Donoghue, Director of Coady Architects said: “HLM and COADY Architects are proud to have been involved in this very important project. The vision shown by both Children’s Health Ireland and the National Paediatric Hospital Development Board in developing the brief and collaborative approach adopted in developing the design through to completion, has helped provide a first-class healthcare facility.

The early engagement of the end-users in developing the brief and design, and subsequent strategic reviews of design quality, has assisted in realising the vision. The diligence shown by the main contractor BAM, and its subcontractors, is to be commended in providing a quality finish. We wish Children’s Health Ireland every success in the next steps of fitout and operation of the project and are confident that it will be well received by the children, parents and staff that will use the building.”
______________________________________________________