A STABLE OUTLOOK BUT CHALLENGES AHEAD

Approximately 96% of construction companies have reported a rise in the cost of building materials between June and August 2022, with 85% expecting cost rises to continue to year end, according to the latest Construction Industry Federation Economic Outlook research. 86% also reported an increase in the cost of labour over the last three months.The increasing cost of materials was cited as the top concern for companies over the next three to six months (86%), followed by access to skilled labour and cost of labour (both 72%), securing a healthy profit margin (69%) and the cost of fuel (67%). 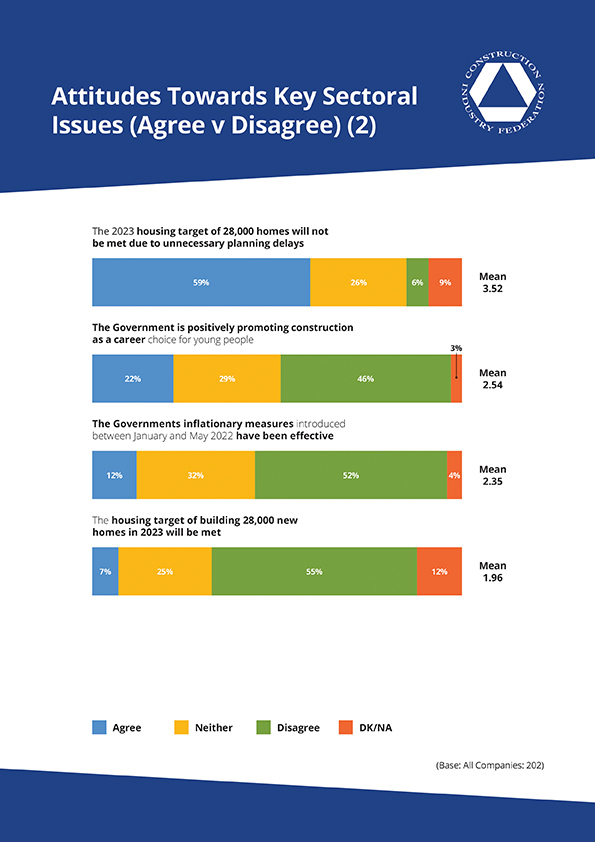 Just 12% of companies believe that the Government’s inflationary measures introduced between January and May 2022 have been effective. CIF believes the primary reasons for this are a lack of engagement and awareness from contracting authorities. 88% hold the view that the increased cost of building new homes will have a negative impact on housing supply in 2023.

Despite the challenging trade environment, the industry remains resilient, with a significant number of companies expecting to increase their turnover and staff. 76% of construction companies reported that their turnover has stayed the same or increased over the last three months, with over one third reporting an increase (35%). 82% of companies surveyed reported that staffing levels had increased or stayed the same, with this trend expected to continue for the remainder of the year.

Director General of the Construction Industry Federation, Tom Parlon, said: “Cost increases are having a significant impact on the construction industry, with rises in the cost of materials, labour and energy. Current indicators from our research are that the outlook is stable for construction companies this year, which have weathered the impact of Brexit, Covid shutdowns and supply chain disruption. But there are challenges ahead, particularly for housing targets.

“To support the industry to continue to deliver on critical housing and infrastructure for the Irish people, the Government should continue to invest counter cyclically and put in place measures to effectively manage inflation in the sector as we look towards 2023.” 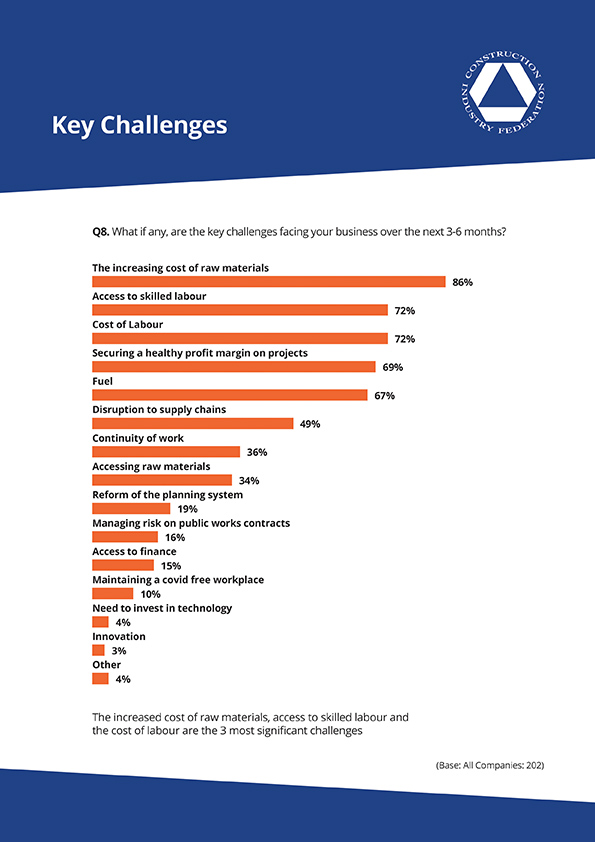 After announcing a 10% levy on concrete blocks, pouring concrete and certain other concrete products in the Budget, the Government has since agreed that the concrete levy will be cut to 5% rather than the 10% announced in the Budget last month. It will also now be introduced in September 2023 rather than next April. The charge will not include pre-cast concrete products in an effort to ensure that jobs in this export-led sector are protected, but will be applied to concrete and blocks coming from Northern Ireland.

The Construction Industry Federation’s Economic Outlook Survey was carried out by Accuracy Research with 202 CIF members between 2nd-9th September 2022.