Construction worker fatalities have decreased by almost 50% since 2015, according to recent figures released by the Health and Safety Authority.

The industry has also seen a reduction in the number on non-fatal incidents over the same time period. The improvement was highlighted as Construction Safety Week kicked off and will see construction workers all over Ireland participate ‘down tools’ for a minute to highlight safety on sites.

Among the initiatives taking place, Rory O’Connor and the construction industry have teamed up to highlight safety on sites and mental health awareness in the week-long national campaign. Comedian and YouTube star Rory O’Connor, is lending his support this year to drive home the importance of Mental Health and Wellbeing. Rory O’Connor, CIF Safety Ambassador, said: “Worker’s mental health is a silent safety issue for construction workers. 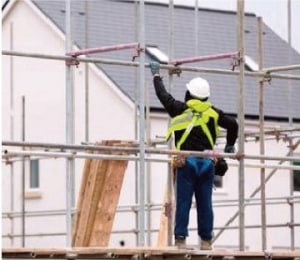 There’s over 145,000 people working in the industry and the vast majority of these are men aged between 20 and 50. I believe it’s really important that they feel they can talk about mental health on site. I do believe mental health problems can lead to physical accidents on site by people not being in the right frame of mind.”