As noted in the introduction, many of the headings discussed overlap. This is in fact a symptom of the collaborative and integrated nature of the BIM process. This collaboration ensures that there is a constant intermingling of information through process. Many commentators are at pains to point out that BIM is not simply technology but a process that requires the use of available 3, 4, 5D etc technology and the collaboration of users, constructors, designers owners and end users to extract the most benefits from IT. Items such as visualisation and particularly constructability require a collaborative approach to be useful.

Basu (2007) understood the requirement for early stakeholder involvement in the process. Some of the greatest drivers of the collaboration and integrated agenda were in the US. The General Services Administration (GSA), an independent US government agency tasked with supplying office space to the federal government mandated the use of BIM and 4D scheduling by 2007, acknowledging the potential of BIM. Another major driver of BIM was the Construction Users Roundtable (CURT). This organisations members includes virtually all the multinational which are present in Ireland today, such as Abbot, Baxter, Intel, Johnson & Johnson, Eli Lilly etc.

Intel in Ireland have started using BIM extensively in the planning of its latest expansion. Full design of these plants are not fully complete when construction begins so they are dynamic environments which are in constant design development. It is certain that this project could not be delivered successfully without this collaborative and technological approach.
BIM works particularly well as an aid to the integrated project delivery (IPD) approach. This approach requires the use of collaborative agreements which can help “harness the power of BIM and Lean Construction Methods” Salmon (2008). He believes corporations who use these processes can leapfrog many of their competitors through efficiency savings.
We are well aware that Partnering or Alliancing are not new concepts. These are not agreements which can suit everybody. Procurement rules in Ireland and the EU make them very hard to enter into on public contracts. There is currently no contract available to the government which they could use. In fact, the current GCCC forms of contract specifically attempt to remove all risk from the client and place it on the contractor’s door. This adversarial contract has lead to many arbitrations and litigations and indeed several contractors have failed to finish many of these contracts due to financial difficulties. It is currently very hard to see how the Irish state could harness the potential benefits of this collaborative approach given their intent on using what are widely acknowledged as the most unfair contracts in Europe or the developed world.
Below is a table produced by Salmon (2008) showing the differences between the collaborative and the combative mindsets?
The idea with the collaborative approach is to eliminate all non-value adding work (Tulke, Nour and Beucke 2008). This requires that “scheduling runs concurrently with other key processes like architectural design, cost estimating etc” One of the major problems with the construction industry is its inherent fragmentation. Disciplines and professions have always worked apart. Architectural firms, Mechanical and electrical consultants, fire consultants, acoustic engineers, structural engineers etc are often different practices and even when they are under the one practice name, they are often run as separate entities. This has lead to constant duplication due to under sharing of drawings and models.
The advent of BIM as the current trend has forced disciples to look differently with regard to its implementation. Particularly if it is being driven by people who will become potential future clients of all the suppliers of these services. Additionally, having used the process, many designers understand the benefits in reducing their own time on the process. They are not being asked to redesign at a later stage because these issues have been discussed and solved collaboratively, have become evident through the shared model and clash detections.
True collaborative approaches require incentivisation to ensure the team have reason to work together. This is normally dealt with through a sharing of gain as well as a sharing of the pain. The idea is that savings made for the client either in the short or long term will be partially shared out with the other stakeholders. Conversely, mistakes made later on in the process can also lead to deductions in profit. However, the use of full BIM with IPD is likely to be a slow process to become widespread throughout the industry. There are many issues such as education, trust and legal issues which will first need to be addressed.
Increasingly, 5D models are being produced which include links with the 3D model, the 4D schedule and the 5D cost and quantity estimates. The quantity surveying practices are also key to full collaboration. With the use of the quantities taken off and a list of their locations, the construction manager can advise and decide on productivity rates and thus make educated assessments on the durations of activities.
Koo and Fischer (2000) concluded in a feasibility study carried out on commercial construction projects, that 4D scheduling helped accelerate understanding of construction works. The sharing of data centrally is also one of the effects of a collaborative approach. Generally the master model is held remotely while different professions and disciplines feed into the model. This helps the model remain a live document and reduces the need for duplicating of works. The sharing of data has its own legal issues in relation to ownership of components, copyright and commercial secrecy or sensitivity. However, there are good examples available on how to overcome these issues and how successful these collaborative processes can be. As previously discussed, Sutter Health project in Castro Valley completed a $320 million project having entered into a collaborative agreement with its designers and contractors as did the University of Washington in relation to Benjamin D. Hall. There are of course many other success stories along with stories which have ended in the courts. 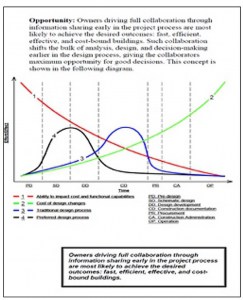